Before I begin, allow me to say how much I love Stephen Collins’ work. Every week I cut out his comic strip from the Saturday Guardian magazine and glue it into my notebook. Many’s the happy hour I’ve passed in the library re-reading old comic strips instead of making notes on yet another article about Spark’s manipulation of narrative time in The Prime of Miss Jean Brodie, and here I am now, writing a blog post about Collins’ first graphic novel instead of sifting through aborted PhD chapter drafts to weed out the useable bits. May I also point out as a preliminary observation that as a title, The Gigantic Beard That Was Evil takes some beating, it really does. For me, this title encapsulates Collins’ work in a very neat way: a superficially childish locution which hides a deeper profundity…and is very amusing at the same time.

Not that there’s much to laugh at in TGBTWE. It’s actually a very sad story, beautifully drawn and multi-layered: I’m not at all sure that I’ve yet plumbed its depths and fathomed all its meanings. The story takes place on the island of Here, which is neat, tidy and soulless. The people who live on Here are also neat, tidy and soulless: they spend much of their time transfixed by the screens of their phones. Everything is homogenised as far as possible and everything is in its place. The daily routine continues unchanged day after day. The weather forecast is the same every day. People go to work every day, but they don’t really know what they’re doing or what their job is. However, this seems to be the way they like it.

Beyond the sea, however, lies There, a place of disorder and chaos. And There breaks into Here through Dave, our enormously likeable hero. Dave is not quite the same as the other inhabitants of Here because although he loves his quiet, orderly life, he doesn’t sit in front of the telly every evening as the others do: he sits in his front room and draws what he can see in the street. But Dave the artist becomes a conduit for evil when There invades Here in the form of an enormous beard which grows out of Dave’s face in the space of a few frames and resists all attempts to be shorn. 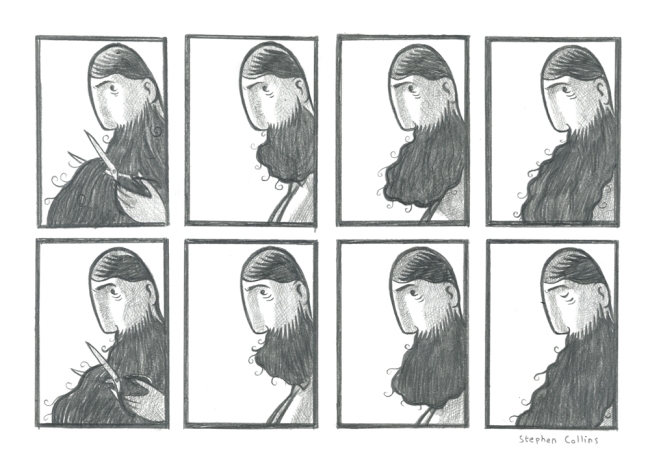 The moment a break in the routine pattern of repetition is established is the moment a narrative is formed. The remainder of Collins’ book relates the phenomenal and inexorable growth of the beard and how finally the beard – and Dave – are dealt with, all to the backdrop of The Bangles’ Eternal Flame, which Dave listens to over and over. The scary story of what happened to the fisherman’s son who sought to know What Was Over There functions as a standard literary device to provide a pre-echo and perhaps an indication of Dave’s fate, but on the other hand, perhaps the same fate did not befall Dave, because his drawings keep coming. Collins collapses the narrative levels here between author/narrator/characters: Dave’s drawings are identical to the author’s own and Professor Black’s final book is not intended for publication, but it’s clear that TGBTWE is that book. Dave’s departure leaves its traces. The world of Here is changed forever, and I’m left wondering whether There is so terrible after all. Perhaps the beard came to Here to encourage its inhabitants to embrace change and to face their fear of difference. 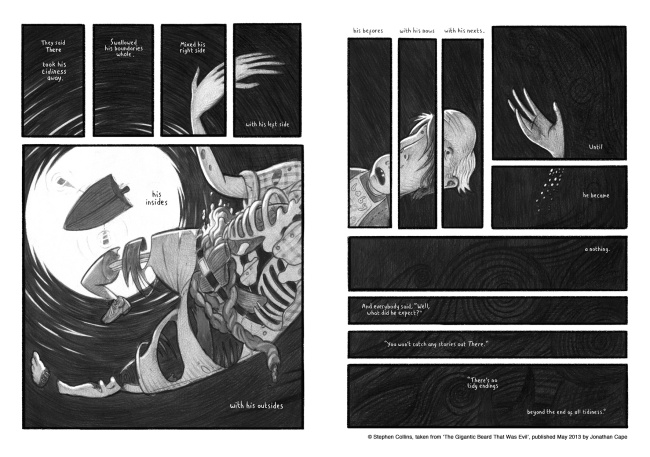 Collins is a satirist, after all, and like my very own Muriel Spark, he uses humour and satire as an effective means of attack. The Daily Mail is vilified in this graphic novel and elsewhere in Collins’ work as a rag for the mindless, a pernicious publication for those who want someone else to do the thinking for them. Its fictional counterpart The Here Mail’s hatred for and suspicion of all things that come from over There will be recognisable to all as characteristic of our very own hate-filled red top. Collins is also an eager parodist of consumer culture: his Exit Ian strip shows a dead man shopping for memorabilia of his own life in a heavenly gift shop before he is allowed to move on, complete with souvenir baseball cap. (You can visit Collins’ website here. Look down the left-hand side for separate links to the Guardian strips.) Once Dave has been removed, his house is turned into a museum and visitors’ centre, and the merchandise for sale invokes an unbearable melancholy while at the same time we can raise a wry smile at the familiarity of the scene.

Worthy of note is Collins’ use of the gutter, or the space between the frames. What may be lurking in the blank space which separates the images ties in with the thematic concern of TGBTWE, and Collins exploits this idea in the placing of captions and the fragmentation of the images. The gutter is also essential to the timing of comic book narratives, and in the image below we can see Collins using the gutter as a kind of film strip, both in external appearance and in its relation to narrative pace: each successive frame reveals the extent to which Dave’s beard has grown since the previous frame, so the reader is left in no doubt that the beard grows in a matter of seconds. 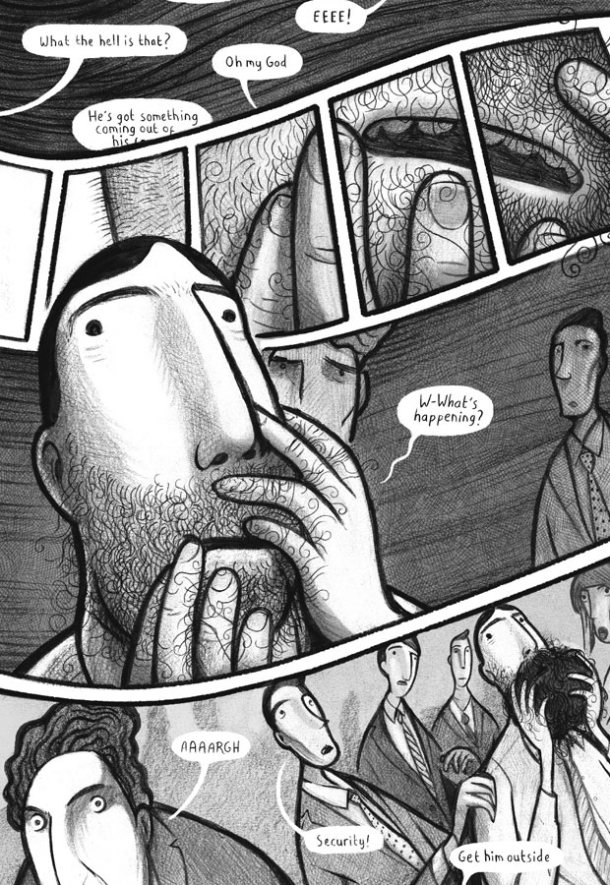 TGBTWE has much in common with utopian narratives: a seemingly perfect world is actually a hideous nightmarish dystopia, because the humanity has been wrenched out of it. In Huxley’s Brave New World the people are controlled by sex and the happy-feel-good drug soma; in Orwell’s 1984 people are controlled by terror and lies. In TGBTWE the people have become like the robots in the last of the Wright/Pegg/Frost Cornetto Trilogy, The World’s End. As is usually the case in utopian fiction, there is no room for art or artistic expression. Dave, the man who liked to spend his evenings with his pencils and his sketchpad, is the artist for whom there is no place in Here, the man who asked what it was that his company actually did (and didn’t get an answer), the man who suspects that the reason for the apparently meaningless routine is fear. The invasion of Here takes the form of a beard in a world of clean-shaven men and Dave always had that small, tough hair that would not be plucked, razored or waxed.

Why isn’t this wonderful book in my Top Five? I wish it could be, I really do, but I thought I was pushing it by lumping Tintin and Asterix together at #2. If I’d put this together with Gemma Bovery as I wanted to, then I would have been giving myself carte blanche to include as many books as I liked in the Top Five, and that’s cheating. So I’m afraid TGBTWE has to remain outside the Top Five as an also-ran, but that doesn’t mean you shouldn’t beg, borrow or steal your own copy right away. You could even buy one. Make sure you have a box of tissues nearby when you read it, however, because it’ll make you a bit weepy. Happy reading!

← I Had That Sherlock Holmes In The Back of My Cab The Other Day
My Top Five Favourite Comic Books, an Also-Ran: Joff Winterhart’s ‘Days of the Bagnold Summer’ →

1 comment for “My Top Five Favourite Comic Books, an Also-Ran: Stephen Collins’ ‘The Gigantic Beard That Was Evil’”