This section is concerned with ‘the literal depiction of textual metaphors’ (Miodrag, 2013: 92) and how this can contribute to the construction of a fictional consciousness in the visual portrayal of an emotion or a state of mind. Versaci writes that ‘we see comics as a metaphoric interpretation of reality and are therefore accepting – whether we are aware of it or not – of the subjective nature of “truth” in comics’ (2007: 74). We saw an example in section 2 of a real reader interpreting a visual metaphor in an episode from TIW, in which the image was held to be directly representative of the character’s mental activity. The use of pictorial metaphor is a very particular and medium-specific method of revealing fictional consciousness, and the deployment of visual metaphor can show emotional response in an immediate and visceral fashion.

Many critical studies of comics refer to the work of American philosopher, semiotician and scientist Charles Peirce (1839-1914), who differentiated three categories of sign: iconic, indexical and symbolic. Iconic signs are motivated and resemble that which they signify. Peirce’s indexical sign is, as Miodrag notes, ‘causal, based on real connection’ (2013: 173), and Forceville describes indexical signs as having ‘a metonymic relation’ with their referents: he gives the example of footprints in the sand, which ‘indexically signify the person who left them’ (2005: 73). Symbolic signs, however, are entirely arbitrary and purely conventional. Any one sign may feature qualities of all three classifications listed above and may not fit comfortably into a single category. Peirce’s work is naturally interesting to comics scholars because comics exhibit all three of these signs in many and various ways.

In her 2009 article on the interpretation of political cartoons, Elisabeth El Rafaie testifies to the ‘prevalence of symbols and metaphors’ (181) in such texts and examines the necessary competences to understand these cartoons. She concludes that ‘interpretation is a matter of drawing on many different types of literacy, ranging from a familiarity with cartoon conventions and a broad knowledge of current events to the ability to draw analogies’ (182). When presented with three political cartoons, the responses of participants in El Rafaie’s experiment differed according to their final interpretation of the cartoon and ‘what they actually saw’ (182, emphasis in original). To explain these results, El Rafaie raises the question of abstraction. Cartooning always features a degree of abstraction, which ‘involves reducing resemblance in order to amplify meaning’, and the ‘greater the degree of iconic abstraction, the more interpretative work and knowledge of cultural conventions are required on the part of the viewer’ (183). Reader competency, therefore, involves not only the ability to interpret iconic abstraction, but a level of familiarity with conventions of the medium, one of which is a set of commonly-used signs which Forceville labels ‘pictorial runes’ (2011).

According to Peircean descriptors, the status of pictorial runes occupies a curious middle ground between the arbitrary ‘through endless reuse’, and the motivated in the original reasons behind their appearance (Forceville, 2011: 887). Forceville defines runes as ‘non-mimetic graphic elements that contribute narratively salient information’ (2011: 875). They are a limited set of elements and they can work in combination. Runes therefore share some characteristics with linguistic systems in that they are a relatively closed set of fixed forms which display a rudimentary syntax(876). Runes are the ‘pictorial equivalents of what in language would be labeled metaphors, metonymies, or other tropes’ and take the form of ‘abstract-looking flourishes’ (876) which seldom communicate meaning on their own. Forceville lists runes as speed lines, movement lines, runic droplets, spikes, spirals and twirls. Speed lines show the trajectory and velocity of an object or a character, whereas movement lines show trajectory in connection with a body part or object. Runic droplets appear around a character’s head and represent water, sweat, tears or spit. Spikes are similar to droplets, and indeed, these two runes are often seen together; the primary function of spikes, however, is to indicate the production of sound. Spirals show negative emotions such as anger, disgust, or frustration, and twirls, which are more ‘loopy’ than spirals, can indicate movement, or dizziness and confusion if appearing above a character’s head.

Nevertheless, the use of runes is not unambiguous. Different artists can use runes in different ways, and usage can differ even across and within the work of the same artist. The positive identification of runes is also not entirely unproblematic, as can be seen in the example from TIW below (figure 14). On the morning of her mastectomy, Iris dreams that she rows out to sea, past the lighthouse where she was hoping to find Henry, and reaches instead an island where a strange monkey-like figure asks her to mend a small doll by sewing its leg together. Iris does so, only to witness the monkey-man tear the doll’s torso so ‘the soul can get in…and out’ (TIW 194-195). 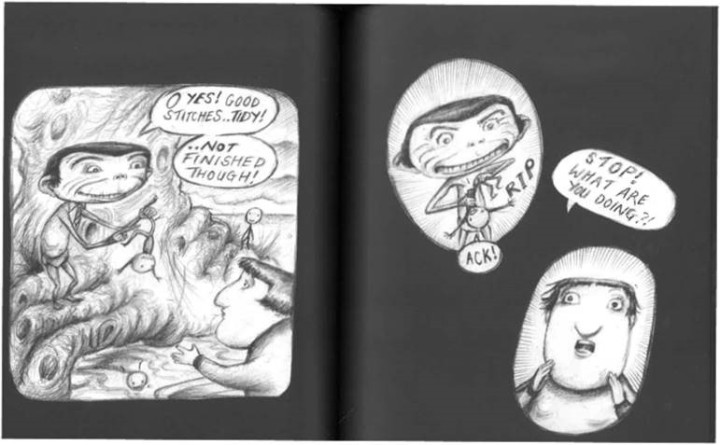 The same spiked lines accompany the monkey-man’s action and Iris’ reaction, evoking a different emotion in each case: the ripping of the doll is a horrific, shocking act and the spikes highlight the aggression with which this action is carried out. On a verbal level, the ‘RIP’ sound effect in this context could also be read as the abbreviation of ‘Rest In Peace’, given that what the reader is witnessing here is clearly an anxiety dream about Iris’ forthcoming surgical procedure. Iris’ horror is clear from her expression: eyes and mouth open, hands raised to her face, and the spikes emphasise her shocked response. In both panels, the spikes also serve to direct the reader’s eye in framing the central image. Three spikes emanate from the tear in the doll’s side, but it should be clear by now that none of the spikes discussed in this example are the runic spikes which indicate the production of sound. The purpose of these spikes is solely one of emphasis and directing the reader’s eye. To conclude this section, the following examples provide a selection of the pictorial metaphors used in TIW, all of which contribute to the construction of Iris’ consciousness. We have already seen in section 4.1 above that Iris is pursued throughout by two grotesque figures which represent Death, and reference was made in section 4.2 to the proliferation of breast-like images in the novel. One of the novel’s more insightful reviewers, Sheila Pham, notes that ‘[t]he breast is a recurring image, analogous to different objects, such as a mound with a tree growing on top where the nipple would be’ (2015, and see figure 13 above). As Iris rows away from the island under lowering skies in the nightmare sequence discussed above, she accidentally decapitates the ‘baby’ with her paddle. The doll-baby’s head with its halo of blood has the appearance of an excised breast, the two small dots for eyes representative of Iris’ two tumours (figure 15). 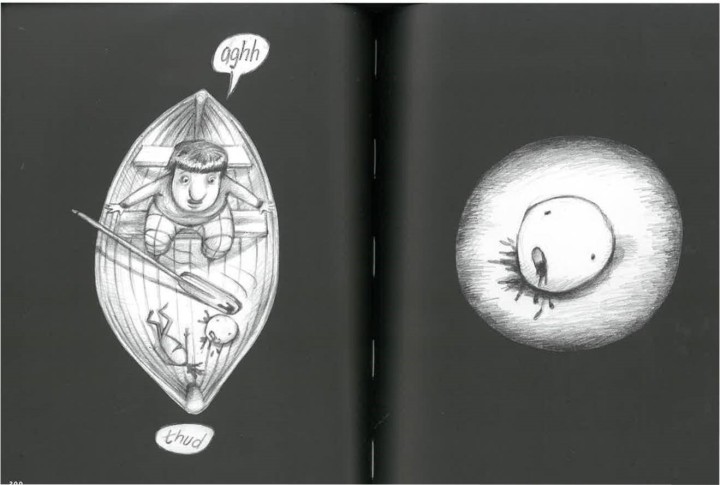 When Iris is told she will have to undergo a mastectomy, two round breast-like panels show the doctor’s mouth where the nipple should be (figure 16). 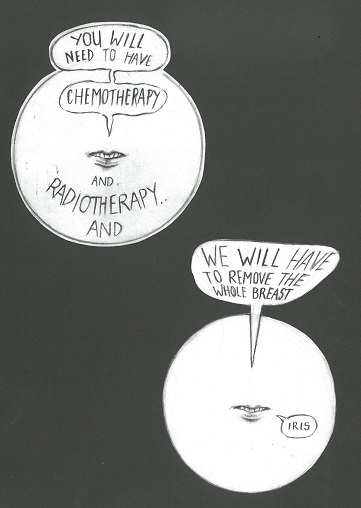 Iris’ metaphorical transformation into a moth at this moment is indicative of her feelings of physical fragility and temporal intransigence. The Iris-moth flutters towards the light of hope which is ‘reconstruction’ only to burn when Nurse Bobby cruelly points out that the surgeons are ‘not rocket scientists’ (TIW p. 68 and see figure 17). Bird imagery pervades the novel, with Iris herself often represented by a motherless baby bird to convey both her vulnerability and her sense of fragility and isolation. As for Henry, his appearances are often filtered by Iris’ consciousness, and this point is pursued further in the section on focalization below. 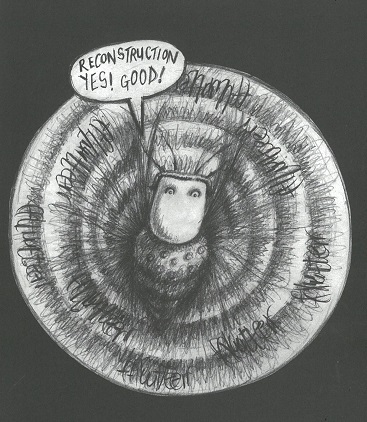 2 thoughts on “Fictional consciousness in comics: Ascribing a mind to Iris Pink-Percy in Rachael Ball’s ‘The Inflatable Woman’: Part 6 of 8”