At the beginning of Muriel Spark’s Loitering With Intent, Fleur Talbot sits in a graveyard writing a poem. Critics have leapt on this with glee, crying out that that’s probably what Muriel Spark herself did! Well, possibly. Big deal. I mean, who hasn’t sat in a graveyard writing a tortured poem? That’s just what every teenager does, isn’t it? And twenty-odd years ago I’m afraid I did exactly this (although thankfully the poem is now lost) and I was listening to Toyah Willcox’s Anthem album as I did so.

I’ve had the idea for this post bubbling on the hob for a couple of weeks now, ever since I re-discovered that particular album on Spotify. I last saw Toyah on the telly lisping her way through a deodorant ad and I’d forgotten all about her, but having been reminded of that purple cassette tape I cherished all those years ago, I can see now, from a distance of more than two decades, exactly why it was that her music was so captivating to me as a moody Don’t-Know-Who-I-Want-To-Be teenager. Before going any further, I should point out that I’m writing as someone who knows very little about punk rock – if that is indeed what Toyah wrote – but I was very good at being a gauche and maladroit teenager and I think I might be onto something here.

Leaving aside the more obvious appeal of sentiments such as ‘So what if I dye my hair? I’ve still got a brain, I’m there and I’m gonna be me’ from I Want To Be Free, Toyah’s lyrics often conjure up a nightmarish landscape of hostile bleakness, peopled with fantastic, monstrous creatures. And of course, this sort of landscape is exactly the kind of godforsaken place you inhabit in your mind as a teenager, for year after year after yet-another-wretched year. My favourite song was always Marionette, which tells of a land in which a marionette pulls the strings, rather than it being the other way around. 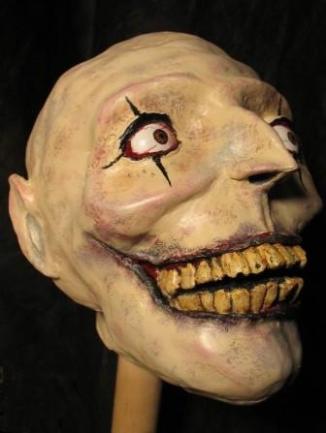 See what I mean? And this particular marionette delights in the misery of her war-torn subjects. The lyrics couple images of subjection and pain with…well, images of coupling. The marionette is a queen bee, serviced by her knaves and pawns so she can bring forth hordes of offspring who sing in the cathedral beneath a swinging pendulum – most likely incense, but in context, I can’t help but think of Edgar Allan Poe’s The Pit and The Pendulum. Of course, it’s probably all metaphorical anyway, but as a teenager, you’re far more likely to take everything literally and to imagine that the land really is ruled by a power-crazed, sex-obsessed puppet, bent on destroying your will and taking control of your life. Power and control are major themes in many of Toyah’s songs, and I enacted my own personal feeble rebellion at the injunction to be home in time for dinner by sitting in graveyards, writing rubbish poetry and listening to Marionette – the one who was once controlled is now the controller. Well, far better I suppose, to be the marionette than the reaper, who laughs before choking and crying.

The Anthem album cover (below) depicts the teenage-psyche-nightmare-place with the central figure, Toyah herself, striding fearlessly across this inhospitable wasteland. She is distant, powerful, beautiful, and it looks as if she’s holding the head of someone who got on her nerves once too often:

And of course, this is the figure you want to be. Toyah was wildly creative. She had massive hair. She used naughty words: ‘whore’ crops up quite a lot, and I can remember the thrill of hearing Toyah shout ‘Silence little bitch!’ in Elocution Lesson (you have to bear in mind that this was in the days when every other word in The Guardian wasn’t ‘fuck’ or ‘onanism’). And she’s only 11 years younger than my parents! – but I would never have believed that when I was 16. Toyah was everything I wanted to be and wasn’t. She’s even got wings in this picture here. But according to the extensive Wikipedia entry, Toyah was born something of a monster herself, ‘with a twisted spine, clawed feet, a clubbed right foot, one leg two inches shorter than the other and no hip sockets’, and of course, that lisp as well. Toyah went through a great deal of real physical suffering to become the astonishingly attractive person that she still is. She has never been particularly interested in either men or women as sexual partners, but she is married to a man whom she describes as her soulmate. She has been sterilised – pregnancy and childbirth would have been dangerous for her, given her past medical history. So Toyah has always been ‘outside’, in a sense, alien to everything, accountable to nothing, including her own biology. She really did cut all those strings.