This month, I’ve started working towards another master’s degree. It’s an MA in Literary Linguistics at the University of Nottingham, but because I’m an online distance-learner (a ‘cool’ as opposed to a ‘warm’ student), I don’t need to travel up (or ‘oop’) north or anything like that: no, I don’t even have to get off the sofa.

There are many distance-learning pathways available, but as far as I understand it, every ‘language’ student has to take the first module – Descriptive Linguistic Analysis – and then we all branch off after that. Unit 2 of this module is ‘Phonology and Phonetics’, and, fascinated though I am by all the mysterious little symbols of the International Phonetic Alphabet (IPA), this unit is not going to be particularly useful to me on my chosen pathway so I can’t afford to get bogged down with it. Shame, really. I quite enjoy playing with all these graphs and charts and whatnot, but there are 13 other units to come and an assignment due in June, so I’ve had to whizz through it all as quickly as I dare.

This post, then, is more or less the culmination of the work I’ve had time to do, and it consists of my response to Activity 02, which is as follows:

Read the [following] passage out in your own accent and try to decide which are the most prominent features of your accent that differentiate it from other accents. Try to transcribe the passage in your own accent using phonetic notation.

The passage in question is as follows:

Please call Stella. Ask her to bring these things with her from the store: six spoons of fresh snow peas, five thick slabs of blue cheese, and maybe a snack for her brother Bob. We also need a small plastic snake and a big toy frog for the kids. She can scoop these things into three red bags and we will go meet her Wednesday at the train station.

It’s a very strange passage, of course, but I’m guessing that the idea is to use as many different sounds as possible from the collection that is available to the English language. (Incidentally, both Roy and I struggled with ‘go meet her Wednesday’, because neither of us would naturally say this: we would say ‘go and meet her on Wednesday’.) One interesting fact I’ve picked up over the last week is that human beings can produce many, many different kinds of sounds with their speech organs (mouth, tongue, teeth, vocal cords, etc.) and no existing language makes use of the full range. Some African languages include clicks and trills produced with the lips, tongue and teeth. These differences in sound will exist across accents as well, of course: the Scottish [r] is very different to the English [r] and there’s a separate IPA symbol for it.

Luckily for me, I live with someone who speaks English in an accent different to mine. I come from Farnham in Surrey, and Roy comes from Chesterfield originally, but he’s lived in the south for a long time. The idea was that I would have a go at transcribing both my accent and Roy’s, and then see if I could pinpoint where the differences lie.

Right, so I’m first up because I speak a version of English which is known as NRP, or non-regional pronunciation. Mine is a neutral accent, one that lacks any obvious features that can be ascribed to a particular region. Here I am reading the passage above:

And here’s my attempt to transcribe my accent using IPA symbols:

And my transcription of Roy’s speech. I’ve highlighted the obvious differences: 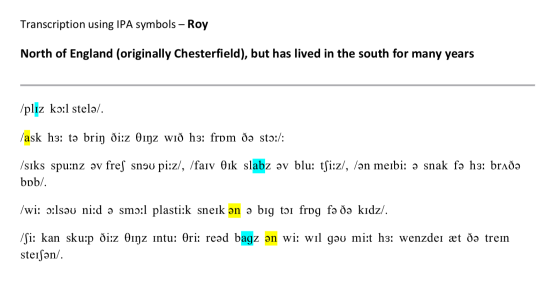 Truth be told, I was quite disappointed with the result, but my conclusion has to be that I simply don’t know enough to be able to provide an accurate rendering of Roy’s accent – or even mine. I know that the vowel sound in Roy’s ‘please’ is much shorter than mine, but I’m not sure I’ve given this the correct notation (hence the blue highlight), and I could find absolutely no way of representing the short vowel sound + very heavy [b] and [g] sounds in Roy’s ‘slabs’ and ‘bags’. The only point I’ve successfully made (highlighted in yellow) is that Roy uses a short, flat [a] sound (as in ‘hat’) where I use a long [a] sound (as in ‘father’) – this is evident in our differing pronunciation of ‘ask’. Oh, and Roy missed the [d] off the end of his ‘and’s more often than I did. But big deal. I knew this already and didn’t need to go to the trouble of transcribing the passage to find it out.

What I’ve produced here is, I know, extremely basic and hopelessly oversimplified. The thing is that I can hear that Roy’s accent is different to mine, but I can’t show it using the symbols I have available to me. The only other possibility is that Roy has lived down south for so long that he’s become ‘southernised’, but I don’t think that’s true and I daren’t suggest it.

At least in attempting this exercise, I’ve been able to make a few observations. To begin with, having two subjects read the same passage aloud gave me a comparable sample to work with, but the readings are not the same as naturalised speech. We both read the passage very carefully – some parts are actually quite difficult to say! – which might be good for picking up the sounds involved, but it gives a stilted, unnatural sample of speech. Language that is written-to-be-spoken is not the same as spoken language.

Quite possibly the biggest drawback I encountered was that I do not know enough to demonstrate phonetically how basic sounds change when in combination with other sounds. Every sound changes slightly in order to accommodate the sound which is to follow, because the lips are already half-forming the shape necessary to produce the sound to come. This can be extended further when you consider the liaisons that exist between words: here I’ve treated each word as if it were a discrete unit, but it isn’t. New sounds are created both in between the phonemes which make up words and also between each word. For example, I always insert an extra [r] into ‘vodka and tonic’, so it becomes ‘vodka-r-and-tonic’ – quite simply because this makes it easier to say. (Not that I say it very often – I’m a gin drinker, myself.)

Additionally, I struggled with consonant sounds such as the [ll] in ‘Stella’ – is there a different sound for each [l]? – and with doubled-up sounds such as the [sk] in ‘ask’. It’s not a separate [s] and a separate [k] sound – it’s a [sk] sound, but how do I represent this? I think the name for this is a consonant ‘blend’, and there’s another example of the same thing in the [bl] of ‘blend’. Perhaps I was supposed to use the overhead bracket to mark these blends, but I couldn’t get it to appear without wiping out the symbols underneath. Hey ho.

That’s all I’ve had time for as far as Unit 2 is concerned. On to Unit 3, and morphology.

← I never thought it would work: The Reed That Just Won't Die
Cups and Cakes: More Fungal Fun →

2 comments for “The UK north/south divide: a phonetic – or is it phonemic? – transcription ”