The cor anglais is a large, heavy instrument and unless you have strong arm muscles like those of Alison Teale (who plays a lot of tennis) you’re going to need a sling or stand of some kind to help you support the instrument for more than ten minutes at a time.

The muscles in my arms and back are positively weedy and I was experiencing some very unpleasant shooting pains across my right wrist when playing the cor. In this post, I review two slings and a stand from the point of view of someone who was going to develop serious tendonitis if I continued playing the cor without support. (My teacher told me simply to build up the muscles in my arms, and of course this isn’t bad advice, but a) it isn’t going to happen overnight and b) at my time of life, it probably isn’t going to happen at all. I’m stuck now with my bingo wings. I might as well learn to love them.)

The Sling That Goes Around Your Neck

The Howarth Cor Anglais Sling (click on the information symbol to the left of the product name for an image) will cost you £16.85, and while it’s better than nothing, it really didn’t work for me. The sling goes around your neck and hooks onto the thumb rest like so: 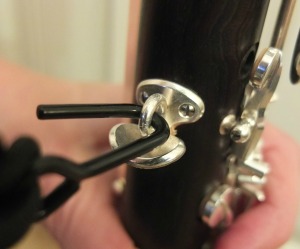 The problem with this sling is that it tends to pull your head forward, so I found that I still had the shooting pains in my wrist plus an ache across my back and shoulders as a result of my head and neck being forced into an unnatural position.

Another solution had to be found.

The Sling That Goes Over Your Shoulders

This sling was recommended to me while I was on a music course and I’m afraid I’ve thrown away all the packaging so I don’t know anymore who makes them. As far as I remember, these slings are designed for saxophonists and I’m pretty sure it cost me the best part of forty quid…anyway, this is what it looks like:

Designed for the sax as it is, this means there’s a little bit of fiddling to be done to set up the sling for a cor anglais because this…

…will not go through the little hook on the thumb rest. I got round this problem by slotting a keyring through the hole on my thumb rest like so:

…and then you can put the sling and cor together like this: 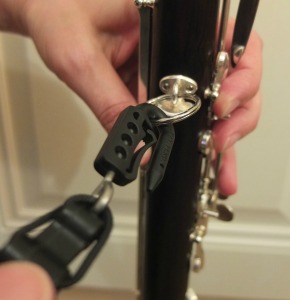 The sling is adjustable, so what you have to do is fiddle with it until the flat piece of plastic at the bottom is sitting where your diaphragm is.

It’s reasonably comfortable and it’s much more effective at load-bearing than the sling that goes around your neck because the weight is placed squarely on your shoulders. It does help – but not enough. I was still getting those pains if I played for more than about 45 minutes. Then Howarth’s started selling these…

This little number saved the day. It is very simply a block of wood containing a metal peg that slides in and out, with a strip of elasticated material that fits around the bell and is fixed in place with velcro. It will set you back a cool £89.95. But it works. The player bears no load at all – the entire weight of the instrument is concentrated on the floor through the metal peg. I can play the cor now for about an hour and a half without experiencing any physical discomfort.

Here’s a view of the bell with floor stand attached:

…and this is how the stand attaches to the thumb rest:

Here’s what the whole thing looks like once assembled: 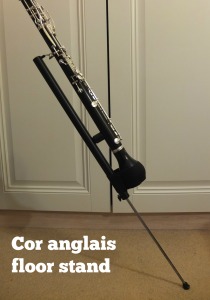 It’s not without its problems, of course. First of all, if you want to rest your cor on a stand you have to retract the metal peg first, but compared to suffering from tendonitis, this is not such a hardship:

There are two other problems: you can’t use the floor stand if you have to play standing up. And secondly, the player does not have the freedom of movement that is possible with the two slings, so if you’re playing in a chamber group and you need to bring other players in, it’s not as easy to indicate when you’re going to start playing. A workaround has to be negotiated. But again, this is not such an insurmountable problem as not being able to play at all because your arms are full of inflammation.

The verdict is: use a floor stand if at all possible, and if you are obliged to play standing up, use the sling that goes over your shoulders. The neck sling (for me, at least) is no good.

One last thing about the floor stand: after every practice session/rehearsal, remove the metal peg entirely and make sure it is dry before reinserting into the wooden case. Moisture will form on the peg while you are playing and if you don’t wipe the condensation away, the peg will rust. I learnt this the hard way. It didn’t occur to me that spit would be dribbling over the stand, and the next time I pulled the peg out ready to play, it was covered in rust spots. I cleaned them off with a wire sponge and painted the peg with clear nail varnish to stop the rust coming back, but my lovely stand is not as perfect as it was and I certainly can’t afford to punt out for another one!

← How To Warm Up
King Gary and his court: repetition and prolepsis in ‘The World’s End’ →

5 comments for “Slings and stands for the cor anglais: a review”