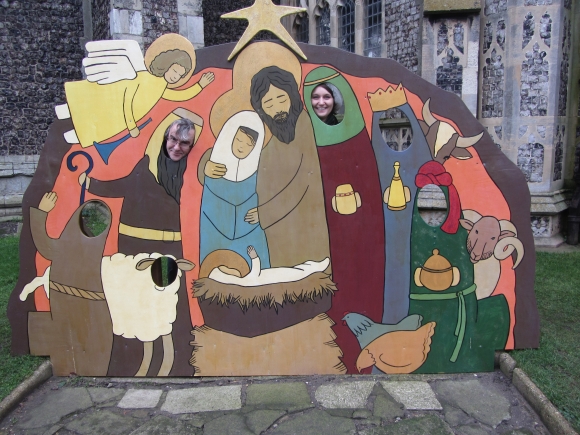 Back now from a lovely three-day break in Norwich, where it was raining. I know it’s raining everywhere in the UK at the moment, but really, every time I go to Norwich it’s raining. Just saying.

The reason behind the Norwich trip was a progress review meeting at UEA, and I was really chuffed to discover that one of my supervisors is friends with Anthea Bell, the monstrously clever translator of the Asterix books. (Blog post about some of my favourite Asterix jokes coming this way very soon! Tomorrow, in fact, if I can lay off the gin this evening.) I also wanted to visit the Sainsbury Centre while on campus, but Roy, My Significant Other, had other ideas…the Sainsbury Centre is something I’ll have to save for next time, when travelling alone. One visit to the Tate Modern is evidently more than enough modern art for one year for Lovely Roy.

One very exciting discovery, as recommended by the hosts of our B&B, was The Workshop. It’s a wonderful place to eat and chat: really beautiful décor, and fabulous food which is both plentiful and very reasonably priced. Upstairs, you can view a reproduction of Tamara de Lempicka’s Portrait de Madame Allan Bott, but if you go down into the basement, you can spend a happy few minutes looking at some rather ripe pornographic images which may be the work of Aubrey Beardsley, or have perhaps simply been executed in his style. One of The Workshop’s best recommendations, though, is that children are not allowed – it’s strictly Over 18s only – and a good thing too, otherwise we’d have to say goodbye to all those lovely images in the basement. Speaking as someone who doesn’t have children, it is always useful to find an adults-only venue. Our pub meal in The Black Horse on the second night of our stay in Norwich was tainted by the presence of an annoying little boy who imagined that we found his gymnastics amusing. We didn’t. So, on the third night, it was back to The Workshop for us. My only whinge about this particular venue, and it’s not specific to The Workshop by any means, is the propensity of youthful waiting staff to call us ‘guys’. Now, I’m middle-aged and my husband is even more so, and to be honest, we’re far too old, and in my case too female, to be called ‘guys’. Attention waiting staff everywhere: please bear in mind that I will happily pay extra in the way of a generous tip to be called ‘Modom’. I go into John Lewis on a regular basis just to have someone call me Modom. It makes me feel valued and important. Thank you.

To continue, Roy’s plan – the one that didn’t include the Sainsbury Centre – was to spend the hours between lunch and dinner Christmas shopping. My Facebook status update when we got back to the B&B was as follows: ‘Christmas shopping in Norwich. Now have very sore feet. At one point in House of Fraser Roy said, “Okay. Synchronise watches. You go this way, I’ll go that way. We’re looking for Young Fashions 8-12 years. Meet back here in five.” And off he went. I hid in the toilets for a while.’ In the end, we found everything we wanted in The Forum, where local craftspeople were selling their wares (should have gone there first).

We travelled out of Norwich the next day to the seaside town of Cromer, where, during the summer months, visitors can watch the sun both rise and set from the same window. We had coffee in a lovely café, the name of which I’m afraid I omitted to note, and Roy read me a topical apocalypse-themed story in the local paper: a hen had apparently laid an egg on which appeared the words ‘Christ is coming’. Turns out that the hen’s owner had written these words in permanent marker on a freshly-laid egg and then forcefully reinserted said egg into said hen.

I wish I’d said that.

Cromer Pier is currently undergoing restoration and has a wonderfully dilapidated air about it. Work has already been completed on the steps leading up to the pier’s entrance, and these are worth looking at: if you stand outside the Hotel de Paris (in East Anglia!) and look down towards the pier, you can see that the steps are laid out to mimic the swirling froth of the incoming tide, and the effect is very picturesque. Even in all its present grey grotesquery, Cromer Pier itself is nowhere near as frightening as the gloomy retro pier at Great Yarmouth, which has more than a whiff of Spooky Abandoned Fairground about it. What’s most alarming about Cromer Pier is the rotting state of the wooden slats which are all that separate you from the fiercely churning brown sea beneath. If you can stick it out for the whole length of the pier (don’t look down!), you’ll arrive at the RNLI station: you can see the lifeboat from the viewing gallery, and from a permanent exhibition you can learn about the wonderfully courageous Henry Blogg, who, during his time on the lifeboats, saved more than 800 lives.

Back into the town itself, we headed towards the absolutely colossal church. In the churchyard we saw a Christmas tree made out of crabbing pots, and one of those seaside boards with holes for your head – this one though, instead of being a huge fat woman in a stripy bathing costume and a very small skinny man, was a nativity scene. You can’t be one of the Holy Family, but you can be a sheep. One of the very friendly locals offered to take our photo and you can see the result above: Roy is the shepherd on the left, and I’m the wise man on the right. (I’ve got the gold.)

We had to wait a while before we could view the church itself because a double funeral was taking place that day – that of a local councillor who had allegedly shot dead his wife and then turned the gun on himself. The case is still under investigation at the time of writing, but Roy and I did find out that they were being buried together. Not sure what Mrs Councillor would have made of that, really, but as I said, the facts of this sad case aren’t yet known. It certainly was a big funeral – there was a police presence and everything. Our host at the B&B told us that the councillor and his wife had been very popular.

Onwards and upwards, and we still had time on the car-parking ticket for a bit more shopping. We found a proper tobacconist’s where I was able to buy some pipe cleaners: they really are the best thing for cleaning out all the mucky spit from the crook of a cor anglais, and it’s very difficult to find pipe cleaners these days – when I’ve asked for them in the past, I’ve been pointed to products for unblocking drains. But here was a real tobacconist with a drawerful of pipe cleaners, so I bought enough to keep me going for the next ten years at least. This wasn’t the top purchase of the day though – oh no, my friends! Walking past one of the local charity shops, we spied a collection of musical instruments for sale…and I am now the proud owner of A CLARINET! I’ve no idea how to play it, obviously, but I’m sure I can get a copy of Teach Yourself Clarinet or A Tune A Day: Clarinet, that sort of thing. Progress reports to follow, dear reader, and once I’ve worked out how to get a peep out of the thing, I’ll see if I can work out how to post a blog video so you can view the result of my efforts. So exciting!

Time for one last anecdote before calling it a day: I said earlier that it’s not a good idea to look down when strolling on the rickety pier, but do look down when pounding the streets of Norwich and Cromer because there’s plenty to be seen underfoot – all sorts of cobbles, paving designs and brass inscriptions. One such inscription in Cromer is a quotation from Jane Austen’s Emma, in which the speaker praises Cromer as a superior place for sea-bathing.

‘Mrs Elton, I think,’ said I, ‘which, given the speaker, means that perhaps the remark isn’t as complimentary as it appears.’

‘What a joy it is,’ said Roy, ‘to be at the seaside with a narratologist.’…which remark is again perhaps not as complimentary as it appears.

5 comments for “Norwich ahoy! or What I Did On My Holidays”